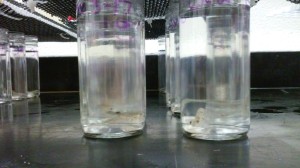 Todays activities involved measuring and sorting shrimp. Each group was given charts consisting of 8 groups of 8 with different ranges of size from 35mm  to 50mm. We started off by measuring each shrimp individually and then placed them into their appropriate containers that each range of shrimp was assigned to.

As shown in the picture, having a  range of shrimp in each group was important to prevent bias of which shrimp the crabs would eat.

Once all of the shrimp were collected, they were organized into individual tubes. Here there were two groups of shrimp. The first group was the control group and had regular saline water. The second group was the experimental group. These shrimp were placed in a solution containing one of three pesticides (malathion, permethrin, or sevin) all of which are commonly used in mosquito replants.

I do not know the results of the experiment, so that is something that i would like to know.

This part of the experiment can easily be split up into three different learning experiences for students. First students learn and practice measuring and the importance of accurate measurement.

Second, the students learn about sorting and making sure that the right shrimp go into the correct containers.

Finally, students can learn about range with this activity. By making sure that the shrimp in each group are of different sizes within the range requested.