More information on the Decline and importance of Blue Crabs can be found here: http://chesapeakebay.noaa.gov/fish-facts/blue-crab

We flipped each different group of crabs, both adult and juvenile, and noted the effects for each. Some observations we were looking for were:

After the experiment each group of crabs were taken to the hatchery in Flour Bluff were the capabilities to track and locate food were tested. We looked to see if the there was an obvious difference between the control and exposed groups.

It was clear when flipping the crabs that the exposed group were more likely to be unresponsive, uncoordinated, inconsistent, and easier to flip than the control groups.

When the crabs were taken to the hatchery to test tracking and location of food, results showed that exposed crabs had a more difficult time with tracking and were unconcerned with obtaining food. In general juveniles did a much better job at tracking and locating the bait than the adults.  The following picture shows the set up used to test the crabs: 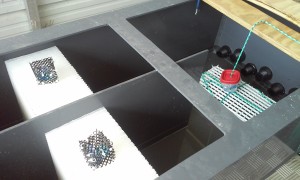 The bait was placed on either the left or right side of the box. After 5 minutes the white cage was lifted and the free crab was tested to locate the bait. Many failed or were unconcerned with eating.

Why were the juveniles less affected by the pesticides?

What is the recovery period for the crabs before they are released back into the wild?

(A)  observe the way organisms live and survive in their ecosystem by interacting with the living and non-living elements;

(B)  describe how the flow of energy derived from the Sun, used by producers to create their own food, is transferred through a food chain and food web to consumers and decomposers;

(C)  predict the effects of changes in ecosystems caused by living organisms, including humans.